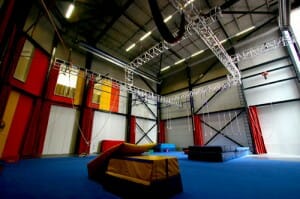 With its breathtaking stunts, unrelenting energy, irreverent humor and cracking live music combined with elements of popular theatre and satire, Circus Oz is always a fresh and original voice in circus.  Each show presents an intimate spectacle of surreal imagery, fully integrated with a live and original musical score, enriching the experience of every act.

As such, it is vital that anticipation builds up from one performance to the next.  So Circus Oz sought the help of theatre experts from the Specialty Group when they decided to improve their rehearsal spaces and equipment.
Specialty Theatre Supplies (under Specialty Group) has an extensive range of theatre equipment: theatre fabrics, stage curtain tracks, theatre winches and motors for almost any stage or theatre requirement.  The company assisted Circus Oz with installations of tracks to lower level steel beams and another set of tracks for the curtains to highlight windows within the rehearsal rooms.  All tracks had a cord controlled system for the paging of the curtains.
“Specialty Theatre was engaged to make and install wool curtains to completely surround and semi-black out our two new rehearsal rooms in Collingwood,” said Anni Davey, Roving Circus Ambassador & New Building Coordinator of Circus Oz.  “The big room now has 4.3 metre black drapes all around making it possible to black out to matinee levels all year round, and the small room–the term ‘small’ is comparative only–has beautiful, colour-matched red wool curtains around three sides with high bay curtains at the second storey windows.
“When completely drawn the room looks fabulous! We were very pleased with the professionalism of the work, the attention to detail (Grant Gaylor was more fussy than I was about the colour matching!), the timeliness of the delivery and the extra special attention we received.”
About the companies:
Circus Oz has delighted generations of audiences for three and a half decades, embracing its role as Australia’s national circus. It has taken its self-crafted performances of wit, grace and spectacle to 26 countries across five continents to critical acclaim.  The Circus Oz show is a rock-n-roll, animal-free circus that adults and kids enjoy.  It promotes the best of the Australian spirit: generosity, diversity, death-defying bravery and a fair go for all.
Since establishment in 1969, Specialty Theatre Supplies, has become a leading provider of theatrical supplies including stage drapery and stage curtain tracks, acoustic curtains, stage rigging, theatre lighting and audio visual solutions to customers all across Australia as well as in 28 countries around the world.